A cashless nirvana? I’m not so sure

Last month another of my local shops in south east London went cashless.

I don’t blame the shopkeeper; her decision followed a knife point robbery. However, it did make me wonder how society is set to change here in the UK if we go totally cashless – the current direction of travel.

Looking at Sweden, just two percent of the total value of financial transactions involve cash. A figure that according to Capgemini and BNP Paribas is set to reduce to less than half a percent by 2020 and, despite their strong emotional attachment to cash, will reduce to zero by 2023.

Sweden is currently the largest pilot of a cashless society anywhere in the world, so by looking at how the experiment is panning out for them we can reach some conclusions on how it could shape up for us in the UK.

Swedes, as with other Scandinavian countries, by and large tend to embrace new technologies. Interestingly, they also seem to have an unquestioning trust of their banks and other institutions and certainly don’t have the same Big Brother concerns we have in the UK.

That said, despite their trusting nature, Swedes are starting to have some genuine misgivings about what being truly cashless will mean for their society and in particular the most vulnerable – the elderly, former prisoners, homeless and undocumented migrants who, without a social security number, can’t get a bank account.

If we follow suit in the UK, we are also in danger of annexing our most vulnerable in society given that it is poorer people who rely on cash more than anyone. It is a sobering thought to learn that 1.3 million adults in the UK don’t have a bank account.

If that is not enough to make us think again about going wholly cashless, we should also have misgivings about our national financial security. In Sweden, all of the financial infrastructure is controlled by just a handful of commercial players. Think of the chaos that would ensue if those organisations’ servers crashed or there was a cyber-attack.

I was heartened to read recently that I and other cashless sceptics are not alone with our concerns. In Philadelphia and New Jersey legislation has recently been passed to ban cashless stores and interestingly I hear New York is considering similar legislation.

And maybe Swedes are also starting to reach for the brake. Last month, Sweden’s Civil Contingencies Agency – the government agency responsible for civil protection and emergency management – issued rather startling advice to Sweden’s citizens: Stockpile cash in case of emergencies. A sobering thought, but also a clear message to countries like the UK that are not far behind Sweden on the journey towards cashless. 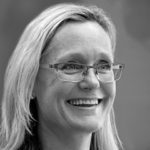 Jenny Marshall is a director at Camargue.