A new lease of life for old fashioned local reporting

It’s not easy to sell local news these days.

Anyone who’s been involved in the media will know the huge challenges facing editors and reporters in newsrooms up and down the country.

There are many reasons cited by experts for declining circulation.

The internet, social media and a shift in tastes, behaviours and attitudes feature prominently on any list detailing their slow but steady demise.

The result is some areas being covered by reporters based in offices many miles away from their patch and local newspapers forced to fulfil a valuable role with increasingly stretched resources.

Local news outlets live on though and many make admirable efforts to provide an invaluable local service.  For every local newspaper still valiantly reporting, there are many others that have closed, reduced publication from daily to weekly or stopped covering remote areas in such depth.

In the past few weeks, however, something unusual has happened: a new print-only local news title has launched and appears to be, at least initially, a success.

You might think the obvious location would be in a hustling, bustling, news-rich metropolitan area.

It’s in the Gloucestershire market town of Wotton-under-Edge.

It’s a good job, therefore, that the two journalists behind the Wotton Times say ‘no story is too small’. 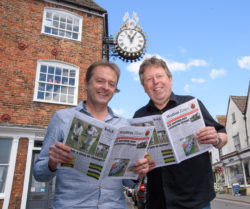 Because Simon Hacker and Matthew Bigwood, the former newsroom colleagues reunited for the venture, won’t be overwhelmed by hard news in a sleepy market town with a population of around 6,000.

While their aim to serve the local community is in the best traditions of local journalism, the decision to have no online presence other than a Facebook page bravely counters current thinking.

If there aren’t people doing that important job, how will residents know when their busy lives may be affected by the closure of key local services or new major development?

Bigwood and Hacker know this is what gives their new brand an advantage.

They are based in the town itself, ‘not in an office 20 miles away’, and sell the paper themselves from a market stall to ensure their faces are well-known.

The new venture in Wotton comes as the first generation of Local Democracy Reporters settle into their roles in newsrooms up and down the country.

The 150 BBC-funded positions will help plug the gap left by click-hungry web operations that see little chance of revenue being generated by council meeting reports.

In an age of struggling news outlets and clickbait, many people who value the traditional role of the local press will welcome the arrival of new hyperlocal titles and Local Democracy Reporters.

That’s because there will always be an appetite for well-researched news written by journalists who demonstrate a genuine knowledge of local issues.

Only time will tell whether the Wotton Times is a viable long-term business; a monthly print-run of 4,000 may seem ambitious for a place of its size.

But the story has already made people reassess the value of local journalism – and it’s given the national press something to write about.

Max Wilkinson is a senior account manager at Camargue