Christmas, we all know, is a time for giving. From our earliest childhood memories to the in-your-face message of ads like John Lewis, we’re drilled to associate Christmas with the act of doing something for someone else – and that’s not to even mention the plethora of cheesy festive pop tunes (‘a time for giving, a time for sharing’ et al).

So we give, and that’s great because what we give – to friends, family, colleagues and charities – makes a difference.

Giving on its own, however, seems to be falling short just now – we need to be seen to give, especially when it comes to charity.

Last week, one of the most impressive fundraisers for charities in my opinion, the City broker ICAP, raised more than £8m for charities in a single day. That’s money that makes a big difference.

Elsewhere, Arsenal’s players donned the red and white and took on Stoke City ‘for free’. They donated that day’s wages to charity.
And every day I’m getting handfuls of emails telling me about what companies are doing to support worthy charities, sometimes almost apologetically and instead of sending Christmas cards.

We’re signed up too. Staff at Camargue donate the last hour’s pay of each year to charity (it’s Oxfam this year) and we’re pleased to do it and we let people know.

So where am I going with this? Is the argument that giving is wrong or somehow diminished because companies and organisations put their name to it? Absolutely not. £100,000 for a new hospice is £100,000 for a new hospice. And philanthropy has always come with a side show of quid pro quo. Guggenheim, Getty and Carnegie, to name but three, knew what they were doing and they made sure that we knew too.

No, my point is to reflect on the motivation and on the direction of travel. Are we moving inexorably towards brand first, benefits second?

So, without a hint of ‘Bah humbug’ but to put it out there, is corporate Christmas giving becoming just a little over-promoted? And might some organisations be thinking a little too much about what’s in it for them rather than what’s in it for the intended beneficiary?

This myrrh is brought to you by Mastercard... 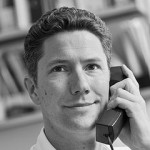 Ben Copithorne is a director at Camargue.