Nobody stuck on the wrong end of a load screen will be surprised to learn that you can string together a computer from textiles and thread.  Ebru Kurbak’s embroidered circuitry, however, is something of a social tapestry.

As well as being exceedingly beautiful, the working 8-bit system displayed at Istanbul’s Design Biennial brings together the distant worlds of the high-tech and traditional women’s crafts.  In the space between the stitches is centuries of female disenfranchisement from professional careers.

Around 19 per cent of the technical workforce at Microsoft is without a Y chromosome.  Comparatively, weaving is almost exclusively conceptualised not only as a women’s pastime but often as a manifestation of artifice defined in opposition to male power.  It is the feared magic of Penelope and Circe, capable of transforming men into pigs and witless fools.

However, the homemaking activities traditionally gendered as female struggle to transcend the domestic sphere into career opportunities for women.  While they’re still more likely to do the cooking at home, for example, women make up fewer than 20 per cent of professional chefs.

It’s a thread that runs throughout history.  Medicine and maintaining a healthy household were also considered a woman’s prerogative until becoming professionalised – and increasingly lucrative – from the 12c onward.  Healing women had a wealth of inherited knowledge but no ready access to the jealously guarded letters and learning of academia.  This condemned them to ancillary roles or character assassination, decried as witches by the newly restrictive profession and the Church.

Limiting women’s opportunities in the labour market also diminishes their power as consumers.  Consider that it was male obstetricians who introduced forceps to childbirth, forcing mothers to move from a seated position to a recumbent one.  The symbolic transition of power is clear.  Even now, women’s absence from research and clinical trials means they’re more vulnerable to flaws in cutting-edge medicine.

The tech sector is one of many tackling its widely-lamented diversity issues, but here too male-centred design is failing to account for the lived experience of the female economy.  Apple’s long-awaited, supposedly comprehensive Healthkit app launched with no reference to menstruation.  Unlike the underlying issue, this only took a year to correct.

The annual Consumer Electronics Show in Las Vegas, where ‘booth babes’ are banned but ‘fitness models’ reign, only adds to the lip-service chorus.

So, with April and a second round of gender pay gap reporting on the horizon, we should remember that tackling inequality isn’t only a numbers game.  Kurbak’s embroidered computer is a material reminder of how much social baggage also needs unpicking. 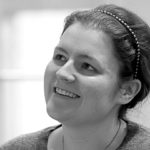 Heather Curtis is a senior account executive at Camargue