You say you want a revolution?

We’ve been promised a ‘new English planning system which is fit for the future’, by Secretary of State for Housing, Communities and Local Government Robert Jenrick, as he fires the starting pistol on the latest efforts to ensure Britain, finally, gets building.

But as the elements set out in his white paper teaser begin to sink in, we find ourselves wondering whether the changes outlined this time will be the revolution we so badly need or just another re-arranging of the deckchairs from our 18th housing minister in a little over 20 years.

The early signs are encouraging, with talk of an ‘infrastructure first’ approach, pledging a further £1.1 billion to ensure transport links and local amenities are established up front, as the foundations to support 70,000 new homes. There’s also significant-sounding support for the crucial Oxford-Cambridge Arc – a project Camargue has long been a vocal supporter of and which has the potential for returns that benefit us nationally.

So far, so good, but investment and policy backing can only ever go so far. The problem we face – the problem we’ve always faced – is untangling the planning process and changing good intentions to spades in the ground.

Jenrick seems alive to this issue, promising a series of robust reforms. These include a new willingness for central government to intervene in slow-moving Local Plan processes and hikes in the fees paid by developers, which should allow planning authorities to process applications in a more thorough and expedient way than is currently the case. And in a really encouraging move, developers look set to be able to win back those higher fees if their plans are refused locally but then succeed at appeal.

Yes, this could be a shot across the bows of councillors playing the politics of opposition to the gallery but there’s also a focus on giving local people and their planning authorities a greater say in placemaking and design. The message appears to be: you need to deliver housing and we will enforce it from central government but you can make local decisions on the shape and format of that development. Maybe this is a quid pro quo effort to make a largescale increase in housing delivery more palatable to local communities.

Are we seeing the shoots of ‘levelling up’ the planning system here, and could this be a move that puts the hard press on planning authorities and communities resistant to change? These measures could all help ensure planning authorities understand the ever growing need to give the green light to new homes and, just as critically, its associated infrastructure.

Perhaps this could finally be the move that solves the age-old issue of how we balance local impact with local and national need?

Obviously, we need more details and we await keenly the spring white paper. We need to understand what else will be proposed to ensure planning decisions can be made quickly, correctly and with a presumption on making the correct decision first time. We need also to understand how the needs of the nation (more affordable, well-designed and well-located homes) can be met, without driving a tank through climate change legislation and the wishes of local communities who want to protect their little bit of Britain.

Camargue’s experience is that the mood is already changing, with a greater appreciation from communities that they need to engage in moves to develop more homes. It's likely there will need to be further compromises on all sides though. Developers, planning authorities and those in communities that would still prefer not to see diggers on their doorstep will all have to appreciate that, if we’re really to create a planning system that’s fit for the future, we will all need to make some serious concessions. 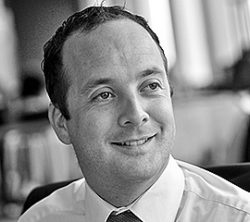 Toby Barker is a director at Camargue